When tapping threads, it is very important to pre-drill with the correct drill diameter. The tables list these bore sizes for use with both cutting taps and forming taps.

Thread types
There are many types of threads, which can be divided into metric (pitch in mm) and English (pitch in turns per inch or n/1"), each with various variants. 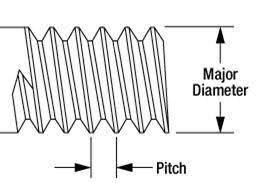 Thread special applications
For certain applications, threads with an exceptional shape or size are used:

Roll tap
A roll tap or forming tap usually has a longer life and works faster. It produces no chips, a stronger thread and is also suitable for blind holes. A disadvantage is the higher purchase price. In addition, much more machine power is required to let the forming tap do its job (approx. 50% higher compared to cutting tapping). Special attention is needed for the right lubricant because of friction and with a lot of heat development as a result.

Cutting tap
With a cutting tap - usually called a thread tap - the thread is cut by machining. A tap is usually made of HSS (High Speed ​​Steel) and has sharply ground cutting teeth. A lubricant is also used for tapping. The supply of cutting oil and the removal of the chips takes place through the recessed grooves of the tap. A set of taps usually consists of: 3 taps for metric threads, 2 taps for gas threads, 1 tap for machine taps. There are taps for the generally used right-hand thread, but also for left-hand thread.

In other words
As the name suggests, cutting taps produce threads by progressively cutting away the space between threads into which the fastener´s external threads will fit. Forming taps, by contrast, remove no material. Instead, they move or displace material inside the hole to build up the threads and dig into the grooves.

Lubricants
When tapping, a lubricant suitable for the material is used, which serves to lubricate and cool. Today there are excellent universal oils available, for example drilling oil, cutting oil, tap oil, even 3 in 1 in aerosol.